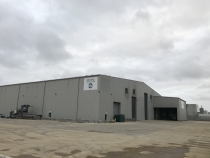 Last year N+P announced the investment decision to construct a Subcoal Energy Pellet Production Plant in Teesside UK. After almost one year of de-commissioning and site preparation works, the project has achieved  financial close and construction work has commenced with pellet production due to commence in July 2019. From start of operations the plant will employee over 30 full time personnel.

The Subcoal plant will consume 250,000 t/yr of C&I feedstock and will produce 187,500 t/yr of Subcoal.  The EPC contractor is Fairport Engineering of Adlington near Chorley in Lancashire.

The Subcoal produced will be of a very high quality with a calorific value being guaranteed above 20MJ/kg, moisture content at about 5% and chlorine content at about 0.8%.  In addition the pellets are odourless, dust free and hydrophobic, which means that the fuel can be handled very easily. One other key feature of Subcoal is that it contains more than 50% biogenic material which is extremely interesting to the major energy consumers at a time where carbon credit prices are ‘rocketing’.

All of the above mentioned benefits in using Subcoal has therefore attracted interest from many utilities currently burning coal as these pellets can act as a substitute to coal. The new Teesport facility will supply pellets to different outlets including Simec Atlantis Energy (SAE) for use in its 220MW coal fired power station conversion to 100% waste derived fuel.  SAE acquired  the Uskmouth coal fired power station in Wales earlier this year, and the parties have agreed a fuel supply agreement to supply nearly a million tonnes per annum to the Uskmouth power station once it has been converted to the burning of 100% Subcoal pellets instead of coal. The Uskmouth power station will come online in 2021. This means that in addition to the Teesside plant, N+P have to build and commission a further 3 Subcoal facilities to support the contract with SAE.

The future for N+P and the patented Subcoal fuel is very bright and the Dutch, privately owned company is looking forward to rapid expansion in the UK. Finally, interest has already been expressed by developers in a number of countries to repeat the roll out of the Subcoal concept around the world.